A VERY IMPORTANT PROMISE: ACTS 2,38 Then Peter said to them, (step 1) “Repent, and (step 2) let every one of you be baptized in the name of Jesus Christ for the remission of sins; and (step 3)  you shall receive the gift of the Holy Spirit.
(The next verse says this promise is for everyone today!)
39 For the promise is to you and to your children, and to all who are afar off, as many as the Lord our God will call.” NKJV

The book of Acts is a record of the early church. Let it be an example for us today!

The Contemporary English Version (CEV) translates Acts 2,38 as: "Peter said, “Turn back to God! Be baptized in the name of Jesus Christ, so that your sins will be forgiven. Then you will be given the Holy Spirit." Most versions of the Bible today translate this verse to have the same meaning.

These words were spoken by Peter (see image below) at the opening of the New Testament church. Does your church teach this clear and unchanging message? 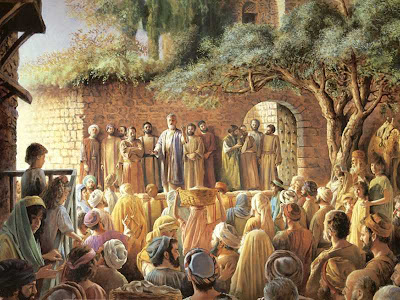 MORE EXAMPLES
Acts 8:16,17 ....They had only been baptized in the name of the Lord Jesus.
17 Then they laid hands on them, and they received the Holy Spirit.
(NKJ)

Acts 10:44,48
While Peter was still speaking these words, the Holy Spirit fell upon all those who were listening to the message.
48 And he ordered them to be baptized in the name of Jesus Christ.
NASB

Acts 19:5,6 (REBAPTIZED) When they heard this, they were baptized in the name of the Lord Jesus.
6 And when Paul had laid hands on them, the Holy Spirit came upon them,....
(NKJ)

These 4 passages in the book of Acts are examples of how the early church (and the apostles) obeyed (and understood)  the great commision in Matt 28,19. The early church understood that Matt. 28:19 points to ONE Name which represents all the redemptive manifestations of the Godhead, for it says "in the name" not names. Matt. 28,19 should not be construed as an oral baptismal formula. If it was then the apostles would have used it. The Lord gave the apostles special understanding of these words of the Great commision.
Luke 24:45-47
45    Then opened he their (the apostles) understanding, that they might understand the scriptures,
In verse 47 Jesus repeated the Great commision again using different wording.
47    And that repentance and remission of sins should be preached in his name among all nations, beginning at Jerusalem. This is a clear reference to Matt 28,19 being fulfilled in Acts 2,38.  I would rather trust the apostles interpretation on Matt 28,19 than anyone else. After all, Eph 2,20 said to! There isn't even one place in the Bible where anyone was ever Baptised (or anything else) using the words of Matt 28,19. Proof that the modern interpretation of this verse is faulty. IT WOULD ALSO RENDER COL. 3,17 and Phil 2,9-10 TO BE MEANINGLESS.
Did the LORD ever say anything knowing that most listeners would misunderstand his statement such as in Matt 28,19? Yes!


We should except Peters words in Acts 2,38!

Most church members today don't understand that the name " JESUS " is the FULL revelation of God!  Why? Because of man-made tradition! May the Lord open your understanding as you study this subject. (also see "UNDERSTANDING THE TRINITY" on this web-site).

The modern church of today does NOT follow these examples of the apostles in the book of Acts!
Shame on them! Eph 2:20 says the church was "built on the foundation of the apostles and prophets,...
(NKJ)
Acts 2:38, 8:16, 10:48, and 19:5 all teach baptism
in the name of Jesus. Some people reject the idea
that these four verses speak of a formula, basing their
argument on the slight variations in the wording. For
example, Acts 2:38 says, “Jesus Christ,” while Acts
8:16 and 19:5 say, “Lord Jesus.”
But their reasoning is faulty. What is significant is
that in the Greek all four verses include the name
Jesus. The words "Lord" or "Christ"  may vary in the four passages
but, the name of Jesus is used consistently. For the oral formula for baptism it is recommened however, that "Lord" or "Christ"
be added (as examples in Acts show) (or both) to identify the Lord Jesus Christ specifically due to the fact that other people in history have been named Jesus.

Because of the exalted position of this name, we are exhorted to rely upon the name of Jesus in all we do or say: "Whatsoever ye do in word or deed, do all in the name of the Lord Jesus" (Colossians 3:17).


Mark 16:16 contains two conditions for salvation: It commands you to believe and be baptized. It did NOT say, “He that believeth and is saved should be baptized.”
Question:

According to Mark 16:16, who shall be saved?
Answer:
Those that believe and are baptized.

John 3:5
Jesus answered, "Most assuredly, I say to you, unless one is born of water and the Spirit, he cannot enter the kingdom of God.
(NKJ)
Is Jesus talking about water baptism here in John 3,5 when He says "born of water"? I believe so. See the following verses:.

John 3:23 Now John also was baptizing in Aenon near Salim, because there was much water there. And they came and were baptized.

Acts 11:16 "Then I remembered the word of the Lord, how He said, 'John indeed baptized with water,(born of water) but you shall be baptized with the Holy Spirit.'(born of Spirit)
(NKJ)
Acts 2,38 instructs baptism in water & Spirit to be saved. It's easy to see the link between Acts 2,38 and John 3,5.

(For a closer look at this subject, see "THE NEW BIRTH" below).

Some will ask, “Well, what about the thief on the cross?" The problem with the thief on the cross when Jesus told him he would be with Him in paradise, is that Jesus was still alive. Christ had not yet died or been buried, so He had certainly not risen yet either. Baptism into Christ was not put into practice until Pentecost in Acts chapter 2 after Christ had risen from the dead and ascended to heaven.

SALVATION BY WORKS?
2 KINGS 5,13-14
13 And his servants came near and spoke to him, and said, “My father, if the prophet had told you to do something great, would you not have done it? How much more then, when he says to you, ‘Wash, and be clean’?” 14 So he went down and dipped seven times in the Jordan, according to the saying of the man of God; and his flesh was restored like the flesh of a little child, and he was clean. (Note: The water did NOT heal the man, but his obedient-faith was the key.It's healing (or salvation) by obedient-faith! (OBEY ACTS 2,38!)

Baptismal Regeneration?
At this point, we must emphasize that the Bible does not teach "baptismal regeneration," for the water and the ceremony do not have saving power in themselves. Water baptism is not a magical act; it is without spiritual value unless accompanied by conscious faith and repentance.  The Roman Catholic Church for example is a promoter of Baptismal Regeneration. Infant baptism is a good example of this. How can a baby have faith and repent? Baptism is important only because God has ordained it to be so. God could have chosen to remit sin without baptism, but in the New Testament church He has chosen to do so at the moment of baptism. Our actions at baptism do not provide salvation or earn it from God; God alone remits sins based on Christ's atoning death. When we submit to repentance and water baptism in the Name of Jesus Christ according to Acts 2:38 22,16 and John 3,5 (and other verses) God honors our obedient faith and forgives our sins.
Why take the chance? Follow the examples of the original church in the book of Acts as I have and be baptised (or rebaptised) with the matchless name of Jesus Christ called over you. THIS CONCERNS YOUR SALVATION! 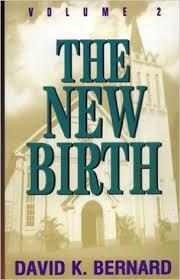 The following book presents everything you need to know about this important subject. CLICK HERE for "THE NEW BIRTH".


(Special note: In "THE NEW BIRTH" there is a good section on speaking in tongues (and miracles for today). My view on tongues however is a little different. I don't agree that one will necessarily speak in tongues in every case that someone receives the Spirit. There are other signs of reception of the Spirit such as praise or prophecy or speaking the word with boldness. In the following verses:(Acts 4,31 8,17 9,17) nothing is said about tongues when the spirit was received. In Acts 4,31 the evidence was speaking the word of God with boldness, not speaking with tongues. In Acts 8,17 it does not say what the evidence was. It could have been the same evidence as in 4,31. It could also be prophecy (19,6). And in 9,18 the evidence was something like scales that fell from his eyes because he was blind. In short, something miraculous besides tongues was the evidence. Some argue that he spoke in tongues and then he received his sight. However, it doesn't say this. There are different evidences that can happen when the Holy Spirit comes in. (See 1 Cor 12,4-11)To say it always has to be tongues is just wishful thinking for some folks. Praise is another evidence in 10,46. The evidence could be any one of these, or a combination as seen.  Chapter 9 page 239 of "The New Birth" points out that speaking in tongues are NOT an infallible sign of the Spirit's abiding presence. A very interesting point indeed coming from someone who believes that you must speak in tongues! 1 Cor 12,4-11 tell us that tongues are one of the gifts. 1 Cor 12,30 also clearly implies that all do NOT experience this!  Do all have gifts of healings? Do all speak with tongues? Do all interpret? Many contend that 1 Cor 12 isn't talking about receiving the Holy Ghost. But verse 13 shows that Holy Spirit Baptism is part of the subject! My conclusion on tongues is that it IS a gift that some do not experience. Tongues are biblical and are for today and can be viewed as a evidence in many cases such as Acts 10,45-47. However, to say that ALL must speak in tongues or they are not saved is taking it too far. To see what the best evidence is for the Holy Spirit read Galatians 5:22-23. If you don't have THIS then it doesn't matter how much someone speaks in tongues! For further study on this view of tongues see the following links:... CLICK HERE
and also click here