If God is a trinity of persons,(instead of simply three ways of revealing Himself) how many thrones are there in heaven, and whom will we see there?” asked a curious student in the religion class.
“You know, I’ve never thought about that. The Bible doesn’t really say,” replied the lecturer, an ordained denominational minister.
I could not believe my ears! An acknowledged theological expert was confessing his ignorance of a basic Bible fact about his God. I raised my hand to respond and then read John’s inspired words in Revelation 4:2: “And immediately I was in the spirit: and, behold, a throne was set in heaven, and one sat on the throne.” KJV
Also see,.. Isa 6:1--Isa 44:24--Isa 43:11

“The Bible does give us the answer. There is only one throne in heaven, and those who go there will see only one God on the throne,” I concluded.“Well, you’ve offered powerful support for your position,” the teacher conceded as the class period ended.Such confusion about the God they expect to see in heaven is by no means unusual among believers in a trinity of persons. 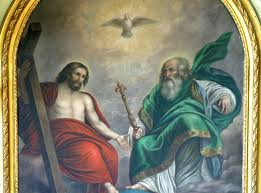 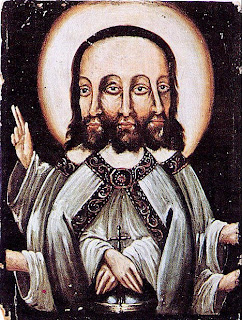 their affirmation of plurality in the Godhead by reciting that God is “three in one.” When accused of tritheism, they indignantly insist, “Oh no! We believe in one God.”
When asked if Jesus is the incarnation of all the Godhead, however, they maintain that He is not, for their “one” God exists mysteriously as three distinct persons. (see COL. 2,9)
While the concept of “three in one” may be a convenient philosophical concept on earth, it does not provide much help in answering the question, “Whom will we see in heaven?” To answer “three in one” is unsatisfactory, for how can anyone see “three in one”?
If they answer that they will see three, then they
are a tritheist—a believer in three separate and distinct gods—despite his protestations to the contrary. If there is a trinity of persons with separate bodies, each of whom can interact with us individually, then they are not one God in any meaningful sense.
On the other hand, if they answer that they will see only one God, then the next question is, “Who will He be?” A study of Scripture shows that the One we will see is Jesus Christ, and once a person agrees to that proposition he has essentially adopted the Oneness position.
Revelation 4:8 describes the One on the throne as “Holy, holy, holy, Lord God Almighty, which was, and is, and is to come.” This Lord is our Lord Jesus Christ, for Revelation 1 has already described Jesus in identical terms: “Behold, he cometh with clouds; and every eye shall see him, and they also which pierced him: and all
kindreds of the earth shall wail because of him. Even so,

Another way of putting it would be that God wears many hats, but He is still one God.
If someone expects or desires to see other divine persons, he should ponder Christ’s words to Philip: “He that hath seen me hath seen the Father; and how sayest thou then, Shew us the Father?” (John 14:9). 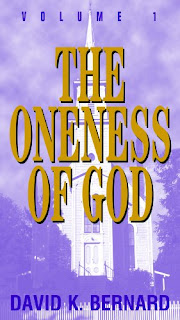 If you would like to know more about "The Oneness of God" here is a PDF book to read. It explaines how the terms "Father, Son, and Holy Spirit" properly apply to God and how everything that God is can ALL be found in Jesus Christ!
CLICK HERE
OR HERE

If you read the above book and still have questions or need further clarity the following book is a sequel that goes deeper.
CLICK HERE